The history of the Jews in Italy—which is an ancient history dating back over 2000 years to the Maccabean embassy of 161 BCE—is characterized by astounding persistence in the face of constantly shifting attitudes towards them. Jewish communities declined in 313 CE, when Emperor Constantine made the promotion of 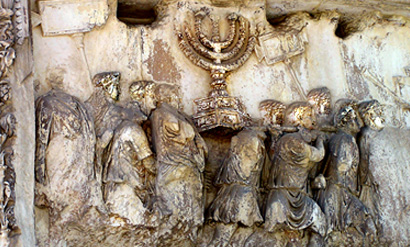 CE 81:The Arch of Titus in Rome, shows a Roman procession triumphantly
displaying Jewish religious treasures Romans looted from the Jewish Second
Temple in Jerusalem.
Christianity mandatory by law, but by 500 CE the Jewish community flourished again. The Middle Ages were a roller coaster of persecution and prosperity: while Pope Innocent III (1198-1216) excommunicated anyone who hired Jews in public positions, Nicholas IV (1288-1292) and Boniface XIII (1294-1303) were said to have Jewish physicians. 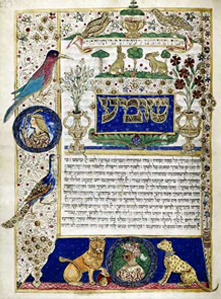 1492 : Rothschild Mahzor, Jewish Prayer
Abraham Judah of Camerino (Marche), Italy,
Jewish Theological Seminary Libraries.
By 1492, much of the population of Sicily and Calabria, then under Spanish rule, was Jewish. That year Spain exiled Jews living in its borders, and many took refuge in Italy, where King Ferdinand of Naples protected them. Under pressure from Spain and a series of hostile popes, Jews were persecuted and exiled from many Italian cities beginning in the 1500s. By order of the Spanish Inquisition, Jews in Sicily and Calabria were forced either to leave or to convert to Catholicism. 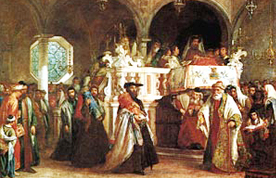 1850: S.A.Hart, Festa della Legge, Synagogue of Livorno
An estimated 80% converted and Jewish practice all but became invisible in those regions. On the other hand, while northern communities, such as those in Milan, Rome and Mantua lived turbulent lives, they were large and established enough to remain intact.

After the unification of Italy in 1870, Jews were emancipated and began quickly to appear in prominent social positions. In 1910 a Jew named Luigi Luzzatti took office as prime minister. By the 1930s northern Italian Jews were fully integrated into Italian society. The history of the Jews living south of Naples, however, was effectively forgotten.

Unlike much of Europe at the time, there was very little overt anti-Semitism in Italy in the early to mid twentieth century. And although there were fanatical anti-Semites within the Italian Fascist party, from its rise to power in 1922 until 1938, it did not focus on anti-Semitism. In fact, until 1938 Jews could and did join the Fascist party. Some Italian Jews became very prominent during this period, such as Giuseppe Volpi, who served as Italy's Finance minister from 1925-1928, and founded what is now the Venice International Film Festival in 1932. 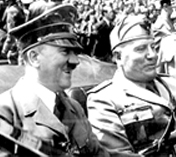 Adolf Hitler & Benito Mussolini, 1940
But things turned dark in 1938. Mussolini stunned the nation, when, bowing to Nazi influence on Italian policy, he legislated his Manifesto of Race. This was a set of laws that stripped Jews of Italian citizenship, and removed them from government and professional positions. They were barred from marrying non-Jews, and foreign Jews living in Italy were incarcerated. These laws were the most systematic persecution of Jews in Italy since the time of the Spanish Inquisition.

Although many Italian citizens turned their back to their Jewish colleagues, the racial laws were not met with the total public enthusiasm Mussolini hoped for. For many Italians, Jews were not racially or nationally different — they were simply friends, colleagues and neighbours who practiced a different faith. After the first few months, even Italian authorities often did not enforce racial laws aggressively, and many Jews, especially those living in small villages like San Nicandro, were left untouched by them.


The Renaissance of Judiasm in Southern Italy

Manduzio's first followers believed that San Nicandro was home to a population of Jews prior to the Spanish Inquisition's campaign in the 1500s. They thought that he was merely awakening the Jewish spirit that had been driven underground throughout southern Italy under the threat of torture or forced conversion.

Rabbi DiMauro in Italy; A contemporary view of San Nicandro, birthplace of messianic leader Donato
Manduzio.
Today the spirit that Manduzio awakened can be seen blowing across the landscape everywhere in Apulia, Calabria and Sicily. Tours have now been organized of the old Jewish quarters in the Sicilian cities of Messina, Catania, and Palermo, Jewish culture centers are being opened in Syracuse and Lamezia, and ancient synagogues are being restored and studied.

Most importantly, though, many southern Italians of long-forgotten Jewish origins are searching for links to their family's past, and upon discovering those links, many are converting back to Judaism. 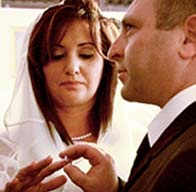 The Jewish wedding of Incoronata Giuliani 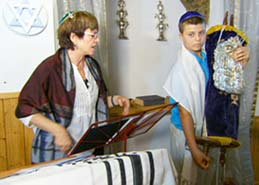 Rabbi Aiello is part of the Jewish revival in San Nicandro.
The small but growing communities these converts have formed are leading the Jewish renaissance in southern Italy. At the front lines of this renaissance are Rabbi Barbara Aiello and Rabbi Stefano di Mauro.

Rabbi Barbara, as her followers call her, was born in Pittsburgh, but returned to her father's hometown of Serrastretta in Calabria where she has established the first synagogue south of Naples in 500 years. Dr. Rabbi di Mauro, although born in Syracuse, Sicily, spent much of his life in Miami. His grandmother, on her deathbed told di Mauro that his family had been Jewish, and inspired by the revelation, he converted and became a Rabbi. After practicing in Florida, he has moved back to Syracuse to open a synagogue and centre for Jewish study.


Italian Judaism in the Diaspora

Early Italian settlers in Israel, including Eli Disalvia, dressed in his Israeli Defence Force uniform.
In 1948 the new State of Israel was ratified by the United Nations, but it was too late for Donato Manduzio. He died that same year, and like Moses, he never saw the Promised Land. Many of his followers, however, were fortunate enough to make it, and twelve families from San Nicandro landed at the port of Haifa, Israel in 1949 and 1950. The families suffered and worked hard in communities that often did not recognize their conversion as legitimate. But after their parents' many years of hardship, the current generation is thriving there—and many are getting back in touch with their Italian heritage.

The descendants of Manduzio's followers are not the only members of the Jewish diaspora to return to their roots in Italy. The spirit that called the converts of San Nicandro back to Judaism has also been stirring in North America, where many people of Italian origin are discovering links to a Jewish past. Some, like Laura Cattari, have actually converted to Judaism and returned to Italy to look for the traces of their families' Jewish roots. Rabbi Barbara Aiello even organizes Bar Mitzvahs, weddings and other events for American and Canadian Italian Jews wanting to get in touch with their origins. Curiously, these diasporic Italian Jews are a pillar of the Jewish Renaissance taking place in Southern Italy. History has a strange way of coming full circle.